A layer in the Terrain Editor .

Terrain is mostly added using brushes, which can be round, square or diamond shaped. It is possible to randomize and soften the edges of them. Roads are added as vectors, which are stroked with a road texture. 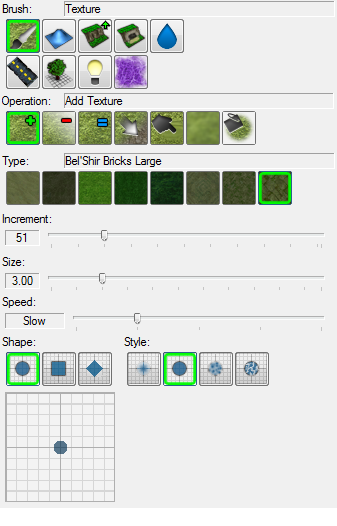 because you can set how much of the existing texture is changed to the new one. With this you have several more options:

The way it works is that you select which type of terrain you want converted to what, then whenever you pass your mouse with the left button pushed it will get changed without affecting other terrain textures. How it gets changed and how quickly/how much depends on the other parameters you can configure, which are similar to those above.

Roads are placed as vectors, which are "dressed up" with textures. Roads looks depends on the hard tiles of the Terrain Types data type that has been chosen.

The equality of the heights depends on where you first click. Whenever you let go of the left mouse button, it will reset the height reference.

When you select the Foliage section, the screen will initially be entirely white. Foliage is the plants and debris mix seen in the map. First decide where you DON’T want the foliage to be using the Disallow Foliage button. The white area is where the Foliage will start appearing. The models used for the foliage on each terrain type is set under the Doodads - Model field of the Terrain Textures data type

Mark the terrain to not allow foliage objects. Click "Generate Foliage" to create the actual objects. Select on the map with left click button where you don’t want Foliage to be.

Terrain objects are complex doodads. Many of them make the terrain invisible. In these cases there is a doodad in the Doodad Layer which corresponds to the terrain object. Other applications are walkable Bridges.

Light tools makes it possible to create different zones with different lights in the same map. Lights are found in Window>Lightning. If you double click an item in the list you will see a "Regions" tab. The tools in the Terrain Modules Light toolbar are corresponding to these settings.

Note: To make regions visible: turn the light regions off! (This has to be a bug) Render>Show Lighting>Show Lighting Regions.